One of the most iconic bourbon whiskeys of the last 10 years, Stagg Jr is world-renowned as a powerhouse barrel-proof that defies the limits of hellish heat. For those with a penchant for fearsome fire, the original is surely the most exceptional that Stagg has released to date, weighing in at a hefty 134.4 proof (Fall, 2013). However, if you consider yourself something of a connoisseur, then perhaps a more balanced bouquet will pique your fancy, such as the Fall, 2015 Batch 5, still no slouch, but with a slightly more robust silhouette that patters faintly with hints of cherry, cinnamon, and rich cocoa.

Whichever side of the coin you land on, no two rankings of Stagg's first 15 batches will be the same, and even after a second tasting, there are no guarantees that your original order would remain untouched. Nevertheless, here is our take on the barrel-proof power rankings - today, ranking Stagg Jr's complete collection of 17* batches from best to worst. 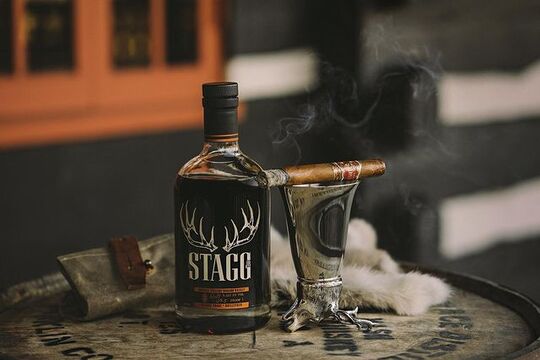 The last ever Stagg Jr before the 2022 Stagg rebrand, Batch 17, released in Winter 2021, is the final 'Jr' instalment and one of Buffalo Trace distillery's finest barrel-proof bourbons. A punchy yet approachable barrel-proof bourbon that weighs in at a healthy 128.7 proof, Stagg Jr's Batch 17 is both a scorcher and smooth, sweet-talker that's perfectly tuned for lovers of Stagg Jr's most memorable offerings. Expect a profile swimming with sweet vanilla, caramel, and molasses, as well as an intriguing 'cherry cola' aroma that intertwines with the classic oaky nuttiness for which Stagg's finish is renowned.

Third time's the charm. For many, Stagg Jr's Batch 3 release in Fall 2014 was the most considered and complete of the initial three and looking back, it is the most exciting and well-rounded fireball of frenzy in their catalog. A truly formidable bourbon whiskey that managed to combine the intense, incredible heat for which Stagg was quickly gaining cult status and acclaim, but with a more refined, subdued bouquet of flavors and a more robust, complex profile. Lashings of cherry were prevalent, not seen before in a Stagg Jr bottle, beautifully balanced by the abundance of sweet vanilla before a mouthfeel reminiscent of buttery silk - there's a good reason why Batch 3 remains a fan favorite among collectors and whiskey buffs.

The second coming. The highly anticipated follow-up to Stagg Jr's original release, the 2014 Spring release Batch 2 is perhaps the rarest and most sought-after iteration of all Stagg Jr bottles in circulation. The perfect storm of hot heat, bold flavor, and refined sophistication, Batch 2 is an acclaimed and audacious bourbon whiskey that represents the very very best of Stagg's very best characteristics.

Fiery and fearsome. Oozing with class and charisma, the 12th iteration of Stagg Jr is beset with an impressive and eye-watering heat - clocking in at 132.2 proof the 3rd highest of all Stagg Jr releases thus far. While hot and undoubtedly spicy, it remains true to the beautifully appointed character for which Stagg is lauded.

Heavy-hitting and hearty. Another scintillating release from Stagg Jr, Batch 15 is a rich and robust bourbon defined by lush praline and brown sugar, powerful potency on the palate, and a long luscious finish that's beautifully complemented by nuanced orange peel, pepper, and oak notes. Staying true to the recipe that has made Stagg Jr a household name, Batch 15 is not to be missed by collectors and connoisseurs and represents one the most complete, well-rounded and revered from the Stagg Jr. catalog - a modern marvel.

The second last junior ever, Stagg Jr Batch 16 is heavy with a chocolate-covered cherry and a dash of cinnamon. Thick and heavy on the palate, the 130.9 Proof Batch 16 is a whiskey that will coat your tongue with uncanny sweetness before a long, warm finish ties this complete and considered bourbon together. Another formidable expression from the esteemed Kentucky brand, and one that will surely become more and more collectible with the end of the 'Jr' series with the conclusion of Batch 17. 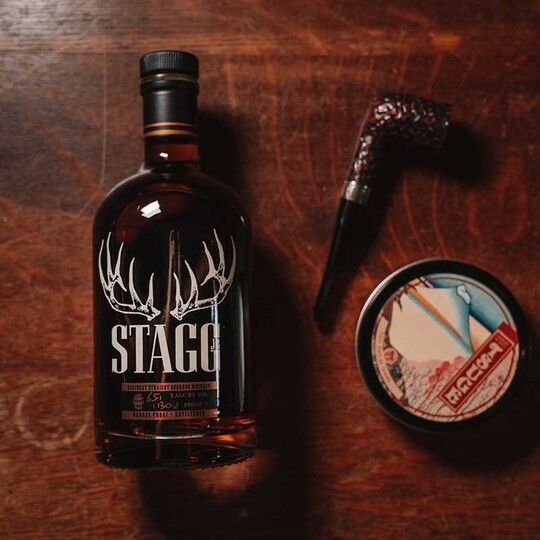 Batch 5 is a bourbon to fall in love with. Widely regarded as one of Stagg Jr's best releases amongst barrel-proof connoisseurs, Batch 5 is decadent and delicious, imbued with rich cocoa, smooth vanilla and shadows of the inspired cherry, cinnamon, and molasses seen in previous batches. Clove and pepper are present and bring a newfound degree of charisma to the hot, hard-hitting bourbon, while this familiar heat works harmoniously with a complex array of flavors to produce a bourbon that is simply sublime.

Otherworldly oakiness. Another stupendous release from Stagg Jr, Batch 8 is perhaps the most fruity and flavorsome to come from the entire catalog. While the heat is prevalent and captivating (without bordering on the overwhelming), considered allusions to Buffalo Trace's familiar passion fruit, mango and orange notes can be found here, while there is ample sweetness, spice, and a deep, overarching oakiness. Arguably the most interesting and unusual release from Stagg Jr's lengthy portfolio, Batch 8 is a masterpiece of creative, surprising, and inspired whiskey craftsmanship.

A welcoming punch in the face. Extreme heat and grandiose flavor are the defining characteristics of Stagg Jr's Batch 6 release, a heavyweight that offers exceptional, and almost awakening levels of heat and spice, which somehow manage to avoid overwhelming nuanced hints of sweet cream, toffee, and vanilla. There is something different about the cherry in Batch 6 that sets it apart from the rest, as if it has taken on a candy-like form. This becomes a near perfect foil for the robust and rich body, making for an out-of-body experience-inducing bourbon.

Assured and astute. By Spring of 2015, Stagg Jr well and truly knew what they were doing and the well-oiled machine began to start producing some of the finest barrel-proof whiskeys in the world - enter Batch 4. Impressively balanced, true to its roots, and beset with a layered sense of spice, succulence, and smoothness, Batch 4 is not to be missed and finishes like it begins, with purpose.

Bold, brazen, brilliant. Arguably more balanced and better appointed than the George T. Stagg release of the same year, Stagg Jr's Batch 14 dominates the palate with a punchy proof that's stunningly paired with a rich, molasses-like mouthfeel and understated hints of cherry, vanilla, oak, and brown sugar. A classic Stagg Jr release, and a must-have for collectors of BT's mashbill 1.

A true winter warmer. The first Stagg Jr. release to coincide with the Winter months, Batch 11 is shaped by the season and is a warming, welcoming bourbon with a sumptuous bite and effervescent, vicious character. Characterized by toffee, maple, and bitter chocolate notes, as well as hints of cola-like molasses, oak, and vanilla, this is one of the most complex and rewarding releases to come out of the Stagg Jr bourbon house. 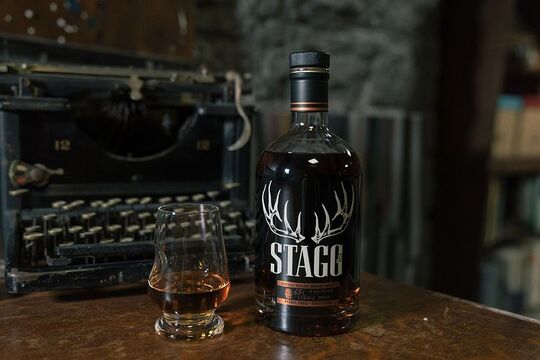 The bottle that started it all, Batch 1 set the tone for every subsequent release, inspiring the robust and rich complexion of Batches 2-15, and sending fans of fiery warmth alight. Unfiltered, uncut, unrelenting. The original, iconic Stagg Jr. and by far the most potent and punchy batch to have been released, Batch 1 is a true tour de force when it comes to heat and firepower, and there is no doubting its impact on the whiskey world since its release - a must-have for those with a passion for innovative Kentucky whiskey.

Spritely and seductive. One of the lighter and more drinkable Stagg Jr releases, Batch 10 represents a slight departure from the oft 130+ proof recipe which the brand is known for. Uncut, unfiltered, and using the same BT no. 1 mashbill as all previous releases, Batch 10 features brighter cherry and fruit notes and is perhaps more representative of the season in which it was bottled, Spring. A divine barrel-proof bourbon that is still no slouch on heat, for those who have experienced the heavy-hitting power of Stagg, Batch 10 is highly recommended.

Ruthlessly rich. Instilled with a familiar flavor profile that brings forth exceptional complexity and balance, Batch 13 is one of the most informed and complete Stagg Jr releases and represents the culmination of the rich, sweet and spicy heat for which Stagg has become renowned. A finish that knows no bounds and a subtle smokiness that inspires and tantalizes the palate, Batch 13 is a remarkable release and must-have for collectors.

Powerful and pronounced. Aged for almost 10 years and bottled at an eye-watering 131.9 proof, Stagg Jr's Batch 9 Barrel Proof bats well above average - boasting sophisticated complexity and unadulterated potency. A heavy hitter with a whole lot of heat, this is one of the great vintage pieces of Buffalo Trace history and a damn fine and damn fiery bourbon whiskey.

Potent and punchy. Not for the faint-hearted, Stagg Jr's Batch 7 clocks in at a staggering 130 proof and is truly a force to be reckoned with. Barrel-aged for nearly a decade, expect a palate experience like no other, bursting with fiery flavor and a prolonged, pronounced finish.

*This list was initially created after the release of Batch 15 and the inclusion of Batch 16 and 17 may be construed as a slightly biased update - regardless, they're still damn good whiskeys!