Leading A Horse To Water: The Meteoric Rise of Kentucky's Bourbon Powerhouse, Blanton's 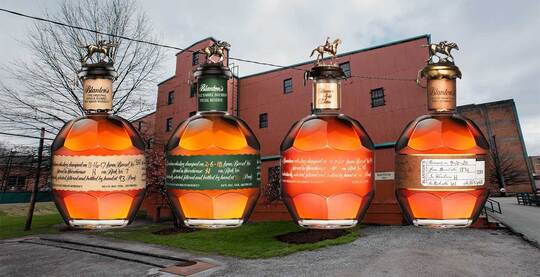 Leading A Horse To Water: The Meteoric Rise of Kentucky's Bourbon Powerhouse, Blanton's

Blanton’s bourbon is nothing short of a phenomenon. An iconic brand that pioneered the world’s first commercially sold single barrel, Elmer T. Lee’s brainchild was once exclusively reserved for esteemed dignitaries or friends of Colonel Albert B. Blanton (in other words, individuals who were either well connected or elite members of high society).

Today, Blanton’s bourbon is available en masse to the public, produced at very high volumes for an ever-growing number of bourbon collectors and connoisseurs keen to accumulate the famous horse-stopper brand.

While this may be a far cry from the tight-knit exclusivity that Blanton’s bourbon was once known for (before it was named Blanton’s), there is no denying that Blanton’s is exceptional bourbon. All it takes is an astute palate to decipher as much, but does this legendary Kentucky distiller warrant the almost otherworldly cult-following that it possesses? To answer that question we must first dive into the history of Blanton’s whiskey and the milestones that have culminated in its status as one of the most sought-after, coveted and collected American whiskeys in history. 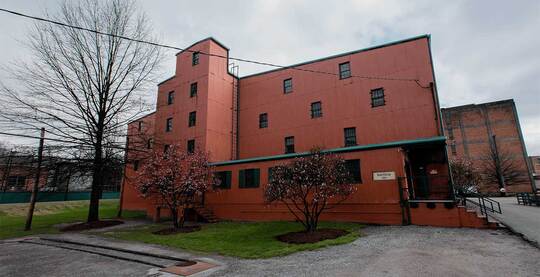 Following the repeal of prohibition with the 21st amendment in 1933, liquor production across the United States skyrocketed, with the distilleries that survived the arduous 13-year dry spell that began in 1920 seeing a meteoric rise in demand for their spirits.

Blanton’s distillery (at the time known as George T. Stagg Distillery following the acquisition of O.F.C Distillery in 1878 by Stagg and subsequently renamed in 1904), was immediately faced with a problem that it would need to overcome to satisfy the almost unquenchable thirst and appetite for their products - storage space. The distillery had quickly run out of space to store barrels, with Colonel Blanton’s solution of a metal warehouse thought to be the fastest way to navigate this issue and create more room.

At the time, warehouses were almost exclusively made of timber, and the metal used by Blanton had a noticeably different effect on the bourbon that he was producing at the distillery. The metal walls of Warehouse H were thinner, with the climate inside much closer to the outside temperature. This essentially exposed the bourbon barrels to the true elements of Kentucky and all four seasons, meaning the liquor interacted with the oak of the barrels at a higher frequency, translating to more rapid ageing of the whiskey and thus creating a greater depth of flavor and a heightened degree of complexity that is still found in Blanton’s bourbon today.

The unique qualities of Warehouse H caused several distilleries to depart from the favored timber warehouse template, preferring to embrace a truer climate-focused approach. In 1984 when Elmer T. Lee launched the Original Single Barrel brand, all of Blanton’s ageing was moved to the esteemed Warehouse H, where all of Blanton’s premium bourbon barrels are stored and matured. 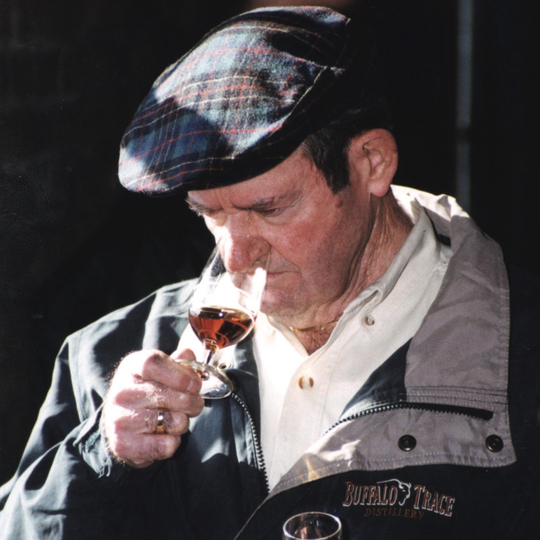 It’s a common misconception that Blanton’s was founded by its namesake and bourbon forefather, Colonel B. Blanton. It was another seminal figure in the fledgling bourbon industry that created the world’s first single-barrel bourbon, Elmer T. Lee (a happy coincidence that Lee now has a bourbon named after him which is similarly produced by Buffalo Trace).

Inspired by his mentor Colonel Albert B. Blanton, Elmer T. Lee drew inspiration from Colonel Blanton’s handpicking of what he called “honey barrels” from the center of Warehouse H when entertaining esteemed guests in the 1940s. This bourbon was bottled painstakingly one barrel at a time, with Lee later defining this process as single-barrel bourbon making.

Blanton’s Single Barrel was formally named as such in 1984, one year before Elmer T. Lee retired as Master Distiller at George T. Stagg Distillery, and in doing so, effectively reinvented and reimagined the bourbon industry. The world’s first single barrel bourbon was the first foray by any distiller to genuinely push the limits of bourbon, redefining what high-quality whiskey was and expanding on this by creating what Lee called a ‘premium’ category - which was effectively Blanton’s Original single barrel.

Blanton’s Original would become the benchmark for premium bourbon whiskey across the globe, bottled at 93 proof, aged between 6 and 8 years in the center of Warehouse H, and composed of a mash bill believed to sit between 12-15% rye (this is the modern mash bill).

Many distilleries soon tried to replicate what Elmer T. Lee had created in his humble Kentucky distillery. Despite their attempts, none were able to produce a bourbon of the same caliber and quality, and with the reputation of Blanton’s Original very quickly becoming something akin to myth, the need for expansion and diversification was soon realised - with breakoff iterations of the Original becoming popular in their own right. 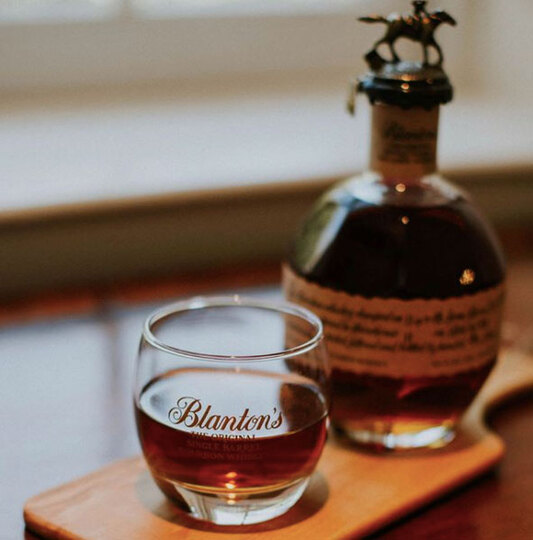 As Blanton’s bourbon grew throughout the late 80s and early 90s as a powerhouse of single barrel whiskey distilling, it soon began to realize there was an appetite for its premium wares outside of the native U.S.

Several export-only releases soon followed, tailored for the specific tastes and interests of different markets. The Blanton’s Special Reserve, otherwise known as Blanton’s Green, is still an international-only release, bottled at 80-proof and an altogether more approachable single barrel than its punchier 93-proof counterpart, the Original.

Many higher proof iterations also exist, with the 103 proof Gold Edition and Cask Strength Straight From The Barrel (~125-130 proof), two additional export-only releases from the ‘core’ collection, made available ubiquitously in 2020 when Sazerac finally caved to U.S. demand for stronger, punchier Blanton’s varieties.

Beyond this, Japanese exclusive releases, Blanton’s Takara Black, Takara Red and Takara Gold are aged for an additional two years, making them slightly more complex, oak-forward and smooth. In Poland, there is an annual release for the M&P Festival, generally restricted to 4 barrels or between 800-1000 bottles, varying in proof but usually closer to the cask strength SFTB, but with an air of refinement and exclusivity that’s more aligned with the ‘dignitary’ heritage for which Blanton’s is known. The French whiskey institution La Maison du Whisky similarly produces a remarkably exclusive single barrel release, with countless high-proof iterations that are exceptionally rare and highly coveted.

Though there is a genuine appetite for Blanton’s across the world, it has never strayed from its roots in Kentucky and remains a proud part of the Kentucky whiskey landscape. Many will note the horse-stopper referencing the Kentucky Derby, and this is yet another nod to Blanton’s place as a Kentucky icon, firmly ingrained in the state’s folklore.

Up until 1999, the horse-stopper was the same for every bottle of Blanton’s bourbon, with this year the first significant update to the brand’s bottling. Now with 8 different variations, all of which combine to spell out B-L-A-N-T-O-N-S, the horse-stoppers frame the stages of a racehorse in motion, another nod to the local Kentucky Derby and Blanton’s inherent relation to its state.

Blanton’s and its place in Modern Whiskey 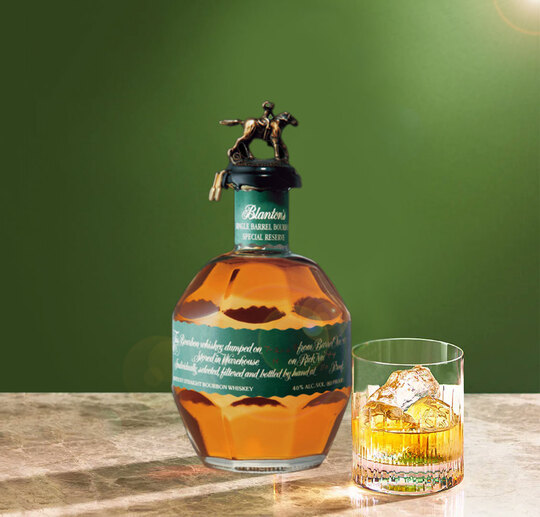 In today’s bourbon scene, Blanton’s represents the same thing it did in the 1940s when it was being hand-selected in minute quantities from the “honey barrels” of Warehouse H - it was and is a status symbol. The caveat to this is that it’s a different type of status symbol in modern whiskey collecting. In the 1940s it was a gift bestowed unto those deemed worthy by Colonel Blanton himself, whereas nowadays it’s an indicator of someone’s position as a collector of rare and premium bourbon.

Regardless of the semantics around status, it remains an outstanding single barrel bourbon and a whiskey of the highest order. Thousands upon thousands of whiskey drinkers, bourbon enthusiasts and collectors pursue the elusive Blanton’s bourbon, and while it may not hold the same exclusivity and aura that it was once associated with, it remains an integral part of the Kentucky whiskey scene and is a coveted collectible for good reason.

So, is it deserving of the status it holds in today’s bourbon scene? Given its place in history and the innovation and quality that Blanton’s brought to the whiskey industry, we have to say yes - it’s an important milestone in the development of American whiskey and it’s still a damn fine sipping bourbon.