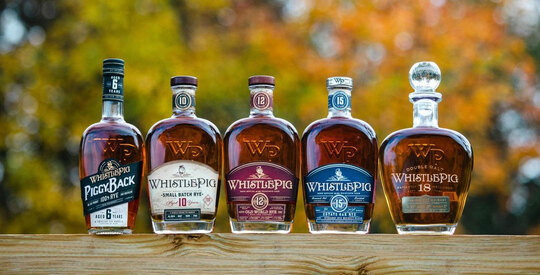 Rye whiskey is indeed a by-product of the North American spirit. It’s rugged, massive, and beautifully aggressive. Like many things in history, the story of rye whiskey is one of peaks and valleys. Newcomers like WhistlePig Rye represent a progressive evolution of this most-beloved distillate. The distillery is putting out bottlings that rival legends like Booker’s Big Time 13 Year Old Straight Rye Whiskey

American whiskey is steeped in history and tradition. But sometimes, we need someone to come along who thinks out-of-the-box. And there may be nothing as American as the entrepreneurial spirit.

When Raj Bhakta founded WhistlePig in 2007, he likely didn’t envision just how pioneering his new venture would become. Based in Shoreham, Vermont, WhistlePig initially began by procuring rescued rye stock from “misuse as a blending whiskey.”

Master Distiller Dave Pickerell would guide this Canadian stock every step of the way. It would be aged in American Oak with a bourbon barrel finish. The combination of skill, well-aged Rye, and unique oak would produce an early flourish of successful releases.

It wasn’t until 2015 that the company acquired its copper pot stills. They currently distil seven days a week and offer a hybrid portfolio based on their own stock and acquired stock. 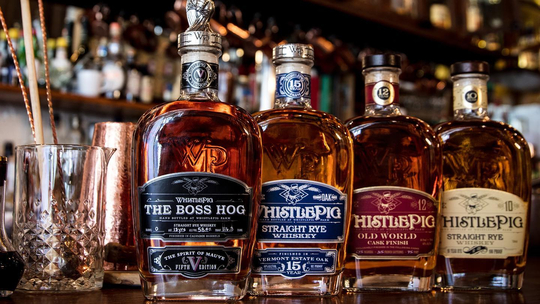 WhistlePig - what’s with the name?

Bhakta first heard the name “whistle pig” while hiking in Colorado in reference to a groundhog. He liked the name and logged it away for a future opportunity.

When WhistlePig Whiskey was founded, it involved the purchase of a Vermont farm sprawling over 500 acres. The farm is at least 150 years old and includes maple trees, rye, corn, barley, and oak trees. Livestock can be found throughout the property including sheep, goats, horses, and bees.

As a tradition, two Kunekune pigs have lived on the farm since its inception. The first generation, which has passed on, was Mortimer and Mauve. In essence, the pig had come full circle and WhistlePig distillery was born. 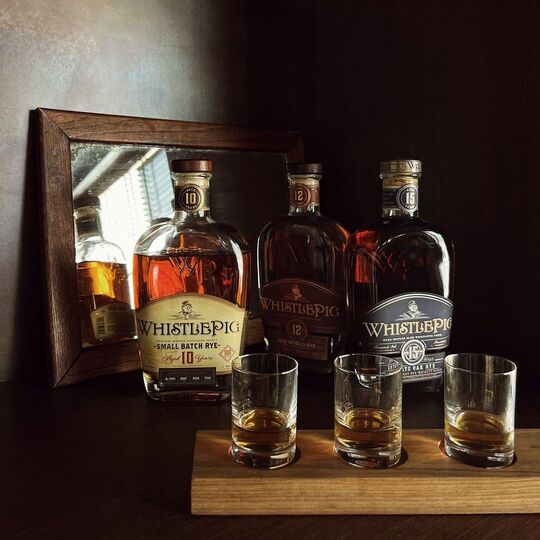 From day one, Whistlepig has been committed to “protect what makes Rye Whiskey great, toss out the rest, and then innovate to make it better.”

Following that mission statement, here are some of the best WhistlePig Whiskey offerings. 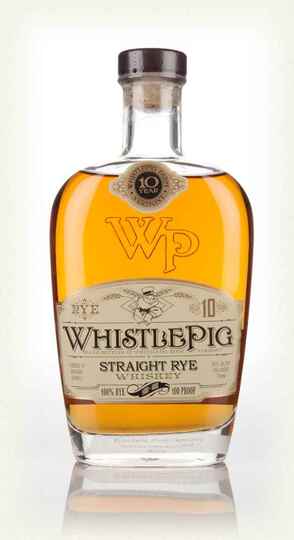 We couldn’t make this list without mentioning the whiskey that started things off with a bang. This small-batch rye is a blend of straight rye aged 10 years and weighs in at 100 proof. WhistlePig 10 represents everything that Dave Pickerell stood for as a distiller. It’s a full-on but stupidly drinkable Whistlpig Rye Whiskey.

Expect orange, clove, mint, vanilla, barrel char, caramel, and all of the classic characteristics of good rye. While on the rare side, this WhistlePig Rye can be found (375ml and 750ml) at prices that make it better for drinking than hanging onto. It’s a great way to get acquainted with what WhistlePig whiskey has to offer. 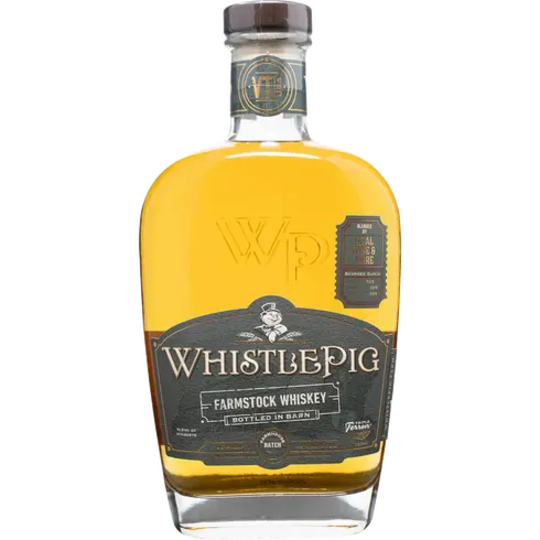 When WhistlePig Rye was first conceived, it was always the aim to produce its own distillate. Farmstock Rye is the culmination and embodiment of a dream achieved. This rye was the first release in the Farmstock series and is referred to as the “quintessential Triple Terroir Whiskey.”

This WhistlePig triptych is crafted from the distillery’s own grain, well water, and locally sourced Vermont Oak barrels. The company has its hand in every single component of the whiskey-making process. There really isn’t anyone else doing something like this.

It’s an 86-proof dram that provides a gentle rye experience bursting with vanilla, roasted chestnuts, and baking spices. Farmstock Rye does consist of a blend of Vermont and acquired older rye.

However, occasionally the distillery bottles Farmstock Beyond Bonded, which is 100% WhistlePig's own distillate. This rarer cousin of Farmstock rye turns everything up to 11 at 100 proof. 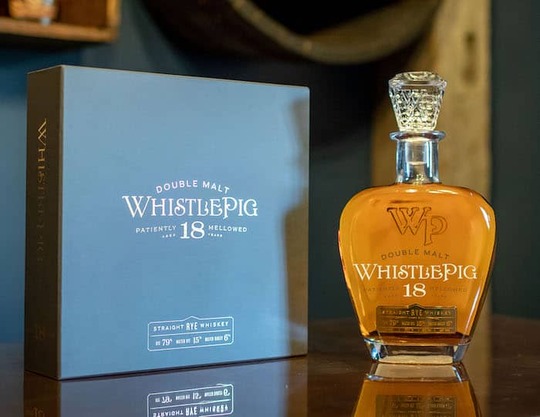 Double Malt is the oldest offering you can find from WhistlePig Whiskey. Remember, the distillery only began producing its own spirit in 2015 – we’re a long way off a Farmstock 18 year old. For collectors and drinkers alike, we don’t really care where the original distillate comes from; we only care about what ends up in our glass!

Double Malt is a reference to two components of this premium whiskey. The first refers to the historical technique farmers used in malting part of the mash bill to kick off fermentation.

The second association is to what may seem more obvious, Rye isn’t the only grain here to give your tastebuds a ride.  The mash includes 6% malted barley alongside 15% malted rye and 79% unmalted rye.

The added barley makes a noticeable difference in that it adds rich, sweet, and toasted notes that linger just a bit longer than you would expect from big and bold rye whiskey. This dram possesses an elegant balance of spice, fruit, and floral notes.

This WhistlePig Rye comes bottled at 92 proof and includes a made-in-Vermont glass topper. There are currently 3 editions available and new bottling is released annually.  It is a must-have for WhistlePig Whiskey fans and sure to be a lovely addition to any collection. 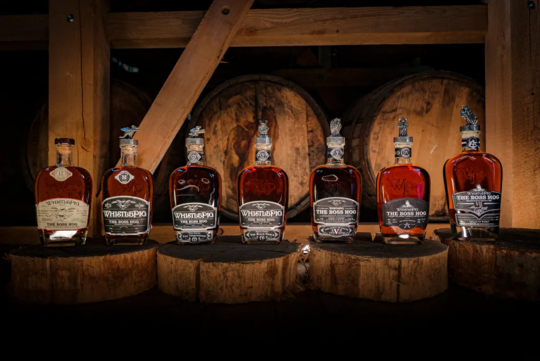 Now we’re getting into the real game-changers of American Rye (and arguably Canadian Rye). The Boss Hog represents the most unique and limited of WhistlePig’s releases. There are currently eight movements in this Vermont-made symphony.

Each annual release is its own creation, but every WhistlePig Whiskey in the series shares a few things:

It will be unique.

The release will range from impossible to find to invisible to the naked eye.

The whisky will blow you away when you drink it.

The Boss Hog stems from WhistlePig’s experimental single-finish program where no concept is considered impossible. Over the years, some of these experiments have brought benefits to its core and yearly released whiskies. For example, WhistlePig’s Old World 12-Year Old Rye comes from the program and is finished in Old World wine casks.

Each bottle comes with its own unique design and elegantly-crafted, bespoke pewter stopper. The OG release is named The Boss Hog I: The Spice Dancer. It is one of our favorites. You can read all about it in this blog post.

We think that the Boss Hog WhistlePig Rye series deserves its own article–so watch this space.

Here is a sneak preview of these  limited Whistle Pig treats::

The Boss Hog VII: Magellan’s Atlantic- after spending 17 years in American Oak it was double-finished in Spanish Oak and then South American teakwood.