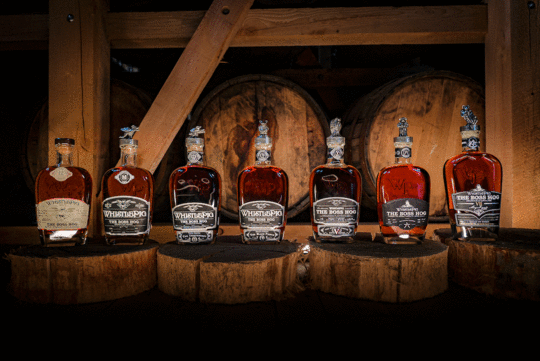 With the new release of the WhistlePig Boss Hog IX 'Siren's Song', we thought it was a fantastic opportunity to create another polarizing power rankings list! This time it's the modern legend of WhistlePig’s The Boss Hog collection. Much at stake. We’re currently sweating as we draw up our rankings.

Hoping to avoid offending superfans and uber collectors, we draw upon inspiration from a 2006 comedy film. In Talladega Nights: The Ballad of Ricky Bobby, a young Will Ferrell is given sage advice by his absentee father, “If you ain’t  first, you’re last.”

As it turns out, Ricky Bobby’s father couldn’t have been more wrong. It’s not a case of black and white, first and last. As he later recounts, “you can be second, you can third [...] Hell, you can even be fifth!”

Remember, with eight special bottlings available, not everyone can be first!

WhistlePig’s The Boss Hog series is the result of distilling legend Dave Pickerell’s experimentation and 2013. Although Dave is no longer with us, WhistlePig continues to carry the program, staying true to his vision.

The Boss Hog collection is built on WhistlePig’s five promises:

We put our heads together to rank all of these fabulously rare whiskies. Each WhistlePig The Boss Hog release is ranked according to its creativity, rarity, taste, and narrative. 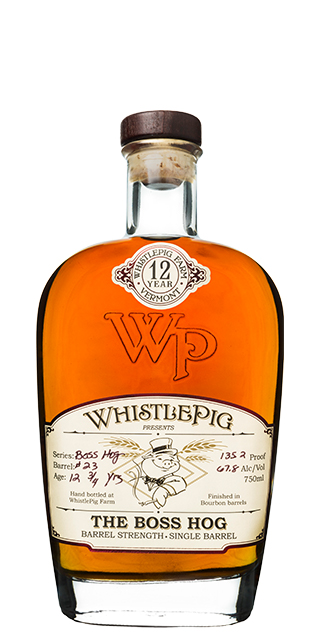 We covered Spice Dancer in our article on rare rye whiskey but here’s a bit of a refresher. The Boss Hog I was released in 2013 as the initial offering in the series.

The oldest and most unique barrels from the distillery’s early rye procurements make up Spice Dancer. The whiskey has an age statement of 12 years, but more importantly, this single grain, straight rye whisky was bottled at barrel strength (130 proof).

What resulted is a balance between creamy vanilla, honey, and cinnamon spice that completely hides the stupidly high ABV.

There were only 24 barrels in total–so not only is this whiskey as rare as they come, good luck even finding a review of someone that has actually tasted it!

During the San Francisco World Spirits Competition in 2017, The Black Prince took home the “Best in Show Whiskey” award. WhistlePig and Pickerell had slain Goliath. The victory quickly made waves across the industry.

Founder Raj Bhakta stated, “the sun [is] setting on [Scotland’s] single-malt empire.” If that truly is the case, we hope they are having a dram of The Boss Hog IV with their last meal.

The Black Prince is named after Edward of Woodstock, a 14th-century English Prince who waged war in Aquitane. While disdainfully burning down villages and plundering French spoils, Edward acquired a love of Armagnac.

For this release, WhistlePig opted for a 14-year-old American (MGP) straight rye. The Black Prince was finished with Armagnac casks–these are typically reused by producers in perpetuity, so they are nearly impossible to source.

The blend of aromatic rye and vinous character makes for an exceptionally rich, luxurious whiskey.

For the third release of The Boss Hog, Whistlepig began playing with secondary barrel-finishing. This time, they chose to finish 14-year-old 100% Canadian Rye in 250-liter scotch hogsheads.

Hogsheads are the largest barrels used in whiskey aging; they are rebuilt ex-bourbon barrels. For The Independent, WhistlePig replaced the barrel heads with new American white oak.

The result is complex rye that has layers of both the new and old world. Oak and spice are greeted with peat smoke–that’s right, these hogsheads once contained peated Scotch single-malt.

This colonially-inspired rye whiskey is bottled at 120.6 proof and features a pewter top depicting a pig with cannon (a reference to Bhakta’s legal battle at the time). 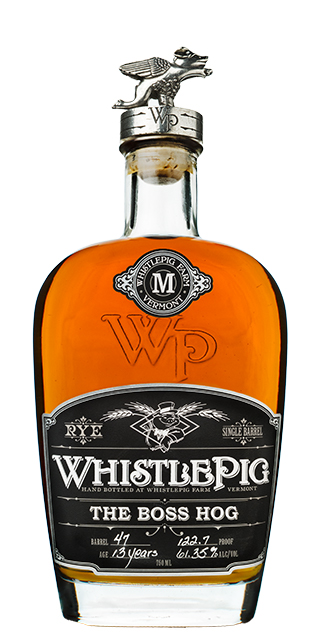 Let’s be honest, when it comes to collecting rare and fine whiskey, many of us are drawn by magnetic narratives and well-spun legends. Mortimer is the first of WhistlePig Farm’s Kune Kune pigs.

Poor Mortimer lost his life defending his partner, Mauve. However, his spirit has been resurrected in the form of this beautiful rye. The Boss Hog II is the first bottling to feature the now iconic pewter flying pig topper.

As the second release, The Spirit of Mortimer is a variation on Spice Dancer. This time, 100% rye has been aged for over 13 years in “an extensive and unique multi-barrel aging process.”

Like its predecessor, it too comes bottled at barrel strength (118 to 124 proof depending on which of the 50 barrels). 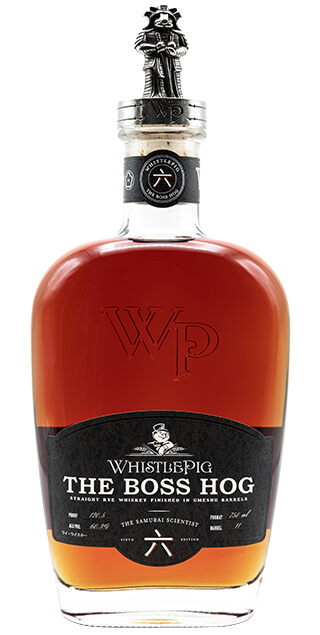 At this point on the list, it feels like we’re splitting hairs. The Samurai Scientist wins out because it features an unlikely union. The sixth release of The Boss Hog is a collaboration between WhistlePig and the Kitaya Shochu Brewery on Japan’s Kyushu Island.

The Boss Hog 六 has at least two differentiating elements. First, the aged straight-rye whiskey was created with a koji fermentation (using a fungus used for making miso and cultured grain). 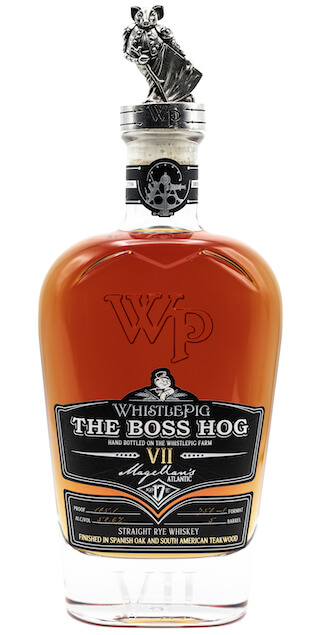 Who doesn’t love a bit of maritime history? The Boss Hog VII is inspired by Magellan’s journey across the Atlantic as the first half of his circumnavigation feat.

After spending 17 years in American Oak, Whistlpig Rye is aged for three weeks on oak casks originating from the forests of Northern Spain–wood that is notoriously difficult to work with (think porous, leaky barrels).

After three weeks, the whiskey is then finished on South American Teakwood to complete the journey. This wood is so powerfully fragrant that it only needs three days in contact with the whiskey–it’s so spicy it’s Christmas in a dram.

Magellan’s Atlantic went through a hell of a journey–don’t make it wait any longer to make it into your collection. 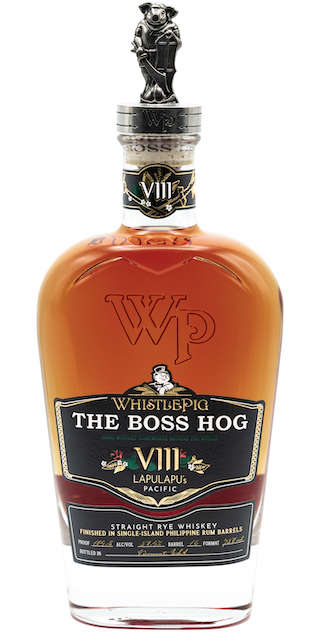 European exploration is built on a foundation of brutality and war. It’s only fitting that WhistlePig’s follow-up to Magellan’s Atlantic marks his demise and the end of his journey across the Pacific.

In the Battle of Mactan, in the Philippines, Lapulapu killed Magellan and drove off his men. Lapulapu would continue to fend off invaders for another 40 years.

The Boss VII features a double finish in high-toast Filipino rum casks. The barrels were sourced from a small island southwest of Cebu, where the great and final battle occurred.

The older darker rum imparts a syrupy and molasses character that balances against the mint, rosemary, clove, and burnt pineapple–dare we suggest you open this corker on a hot beach?

Rounding off this eclectic list is the fifth release in The Boss Hog. The Spirit of Mauve is another tribute to the fallen Kune Kune pig from the farm. After surviving the death of Mortimer (and giving birth to Mortimer Jr.), Mauve passed on Valentine's Day from a “broken heart.”

The first thing you will notice about The Spirit of Mauve is that it comes packaged in its own coffin! The good news is that the pewter top depicts Mauve ascending to heaven.

What do pigs love more than getting stuck into some apples? For The Boss Hog V, 13 years old straight American Rye (95% MGP, 5% WhistlePig stock) is finished in ex-Calvados casks.

The French brandy is distilled from apples and pears and contributes a lovely apple pie and mulled cider character to the rye spiciness. This WhistlePig straight rye has slightly less depth than most others in The Boss Hog collection.

But it’s a must for pig lovers and cider brandy drinkers everywhere!