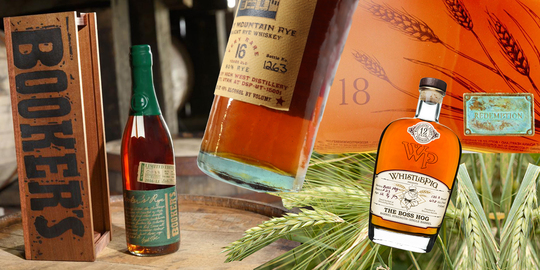 Rare and Aggressive American Ryes that more than exceed the hype

Often overlooked as the ugly sibling of bourbon and American whiskey, Rye once held the hearts of North Americans everywhere, and while Kentucky Bourbon and Tennessee Whiskey are still the kings, Rye is making waves across not just the country, but in whisky circles all around the globe!

Many of the most widely available ryes on the shelves of speakeasies and prohibition-style cocktail bars will feature brands like Rittenhouse or Wild Turkey. Great for mixing or drinking neat, these Kentucky-style rye whiskies are known for their drier, spicier complexion and slightly more peppery profile when compared to many corn-based whiskies.

Kentucky Rye just about meets the minimum legal requirements of having at least 51% rye in the mash bill, the rest of which can be made up of corn, barley or other grains. However, for the more adventurous, we have classifications for regions and their typical mash bills. There are styles of rye like Monongahela from Pennsylvania (70-100% rye) and Indiana Rye (95%) among others. This is a good thing! Many of us simply cannot get enough rye!

Rye enthusiasts like ourselves are not satisfied with a Rye whiskey that is nearly half other grains! We want full cinnamon, clove, cardamom, white pepper and a refreshing dryness. We expect that aggressiveness on the palate to be backed up with a massive body and the taste of alcohol on the finish.

To appease the discerning Rye drinker, many producers of long ago and those today continue to put out these high-rye ryes. These refined libations are from another time. They have turned back the clock on whisky lovers and collectors everywhere.

Because of their aggressive nature, these ryes can be found in limited quantities and typically are not more than seasonal releases or one-offs. Of course, there are always exceptions, producers like the High West Distillery in Park City, Utah have made it their modus operandi to put out big ryes. 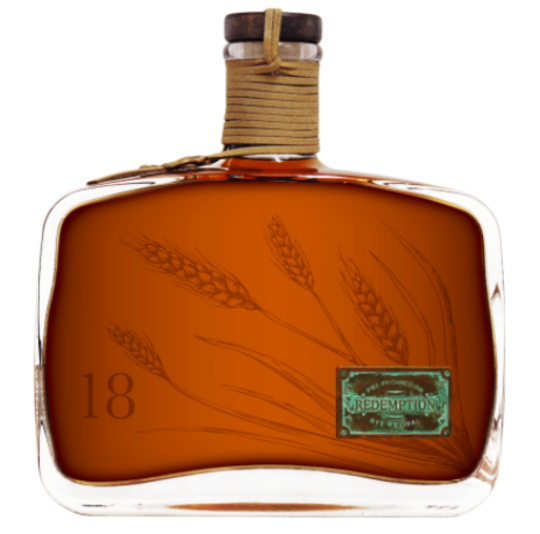 According to Redemption’s Master Blender Dave Carpenter, “Rye is the past and future of American whiskey.” Putting those words into action, Redemption has released the ultimate expression of pre-prohibition Rye whiskey for modern times.

Redemption 18 Year Old Rye was distilled in 1998 when the distillery first started production. The 95% rye mash bill was laid to barrel to mature and 18 years later, this dream of rye was packaged at a cask strength of 109 proof with only 600 bottles released!

This whiskey is described as having notes of cedar, dark chocolate, and all the hallmarks of a big rye. Expect a beast on the palate brimming with baking spice, baked apple, peaches, rich caramel, and maple. Let this resurrection of early twentieth-century American rye transport to you back to simpler times.

Adding this bottle to your collection is a tribute to the American Dream! 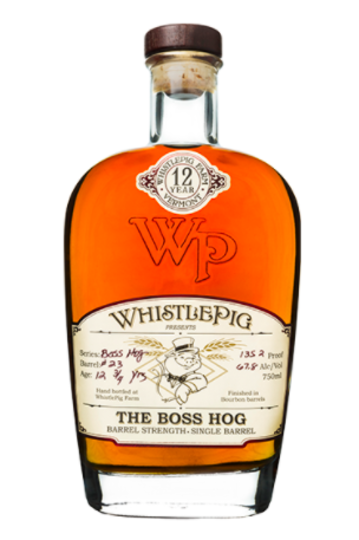 Another relative newcomer to whiskey production, WhistlePig Pig was founded in 2007 with the dream to bring back the 10-year-aged rye whiskey. They paired with Master Distiller Dave Pickerell, formerly of Maker’s Mark, and procured some 10-year-old Monogahela style (100% rye) whiskey and the rest is history.

Continuing their success, they opened the doors to their distillery in Shoreham, Vermont in 2015. Based on a 150-year old dairy farm, there is nothing barnyard in the house flavors of WhistlePig’s rye!

The Boss Hog represents an evolving string of highly limited releases from this elite rye producer. The first of these, Spice Dancer, is a release of “pure barrel strength” straight rye whiskey from 24 of WhistlePig’s oldest and most unique barrels.

This bold rye weighs in at 130 proof. According to the distillery, “nowhere available, is a barrel strength aged rye of the highest-rated rye whiskey around.”

Expect vanilla and fruit on the nose with musty and funky wood-aged notes. On the palate, you will get the bright character of Whistlepig’s high-rye. It’s almost like biting into cinnamon bark and cloves with a delicious oaky finish of red pepper and dark chocolate. It’s a whiskey and desert in the same glass!

Good luck finding one of these rare initial releases! But if you acquire one and are tempted to get it into your decanter, opening this beautiful rye is a special occasion in itself! 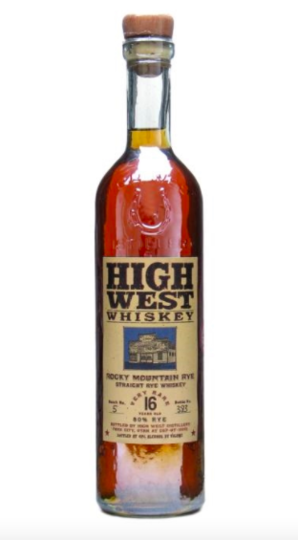 Utah might be one of the last places on earth that one would expect to find high-end whiskey. But being the first legally licensed distillery in the state since the end of American Prohibition, High West has been at the forefront of the resurrection of American rye.

Beginning in 2007, biochemist David Perkins sourced 6-year old rye from MGP and 16-year-old Barton rye for blending in what would become the distillery’s flagship, Rendezvous Rye. More than a decade later High West now puts out core offerings with their own distillate.

But in 2012, they released the Rock Mountain Rye 16 Year Old. The distillery states that the whiskey was found “quietly aging in a Kentucky warehouse” and that these “incredible whiskeys were destined for blending into Canadian Whiskey… until we sipped them.”

High West was only able to procure a small number of barrels of this beautiful rye but we are all the better for it. Weighing in at 80% rye with an ABV of 46%, this whiskey explodes with a big rye character but is subdued with a soft finish. The drinker is greeted with fiery cinnamon and baking spices and lifted up with a slightly sweet, vanilla finish.

Unlike most high-ryes, the Rocky Mountain Rye is more approachable. It’s a sheep in wolf's clothing. Any High West limited release is worth grabbing for any collector or as an investment. But High West released only 1300 bottles of this beast into the wild! This bottle is a must-buy for any lover of rare American whiskey!

Booker Noe was the grandson of Jim Beam and a master distiller for more than 40 years. He is also renowned among connoisseurs for the Beam group’s releases of small-batch bourbons under his namesake.

Many of these bottlings are beloved by collectors and can be difficult to procure. However, none may be more important than the sole release of Noe’s small-batch rye. Unfortunately, Booker himself would not live to see the day, but the “Big Time Batch '' was released posthumously by the distillery.

Breaking the bonds of Kentucky traditions at nearly 80% rye, this limited batch has reached mythical status. All sentimentality cast aside, this whisky says “f**k your feelings”. Its alcohol content of 68.1% laughs at all that stands in its way.

Those who dare to try this monster will have their senses assaulted by complex layers of freshly kilned baking spices. It’s Christmas, pepper, wood, citrus and so much more! Dark chocolate and plums and sweet teas on the palate. It finishes with satisfying oak vanillins and mouth-drying tannins before the alcohol warmth takes you to church on Saturday. Only, you actually wanna be there!

But with high-quality rye, it isn’t just about who can make the most noise. In 2017, The Whisky Bible crowned this as the best whiskey in the world. And since then, it became that much harder to get one’s hands on a bottle! Thanks, Jim!